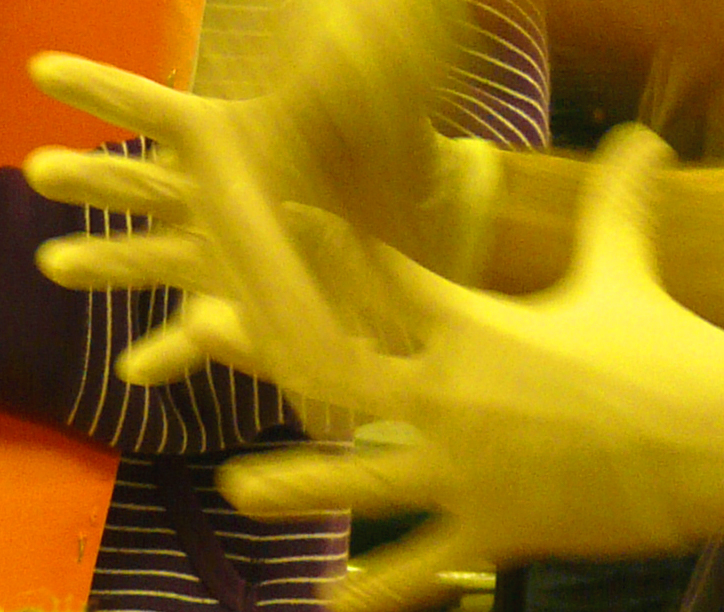 A student's hands in communication

We just don’t seem to have the words to express the depth of understanding gained through touch.

Over the last few years that I’ve been observing Ian teaching anatomy lessons at Flinders it seems clear from the data we’ve collected -including video documentation, student questionnaires and interviews that hands provide a bridge between theory (written and spoken) and a spacial, structural and functional understanding of the body.

Currently we’re following a line of inquiry that focuses on the importance of  touch and gesture in learning and communicating the complexities of human anatomy.

The starting point seems simple- I’ve begun to look for evidence of touch amongst the various forms of representation in this learning environment- direct points of human contact with the models.

The ridges around the ends of some of the long dry bones  in the anatomy lab show signs wear- the femora and and the humeri, in particular. The internal filligree structures are revealed and the shafts are slightly burnished. These bones are constantly handled and highly valued by the students.

Biographical Statement 2011 Catherine Truman is co-founder and current partner of Gray Street Workshop in Adelaide, South Australia. Established in 1985, it is one of Australia's longest running artists' co-operatives. She has traveled and exhibited widely nationally and internationally and is represented in a number of major national and international collections including the Pinakothek Moderne Munich, Museum of Auckland, National Gallery of Australia, National Gallery of Victoria, Queensland Art Gallery, Art Gallery of Western Australia, Powerhouse Museum Sydney, Art Gallery of South Australia and Artbank In 2007 she was awarded an Australia Council Fellowship and selected as a Master of Australian Craft 2008-2010. Truman qualified as a practitioner of the Feldenkrais Method in 1999 and uses the body as a starting point in her work. Her work has always been informed by a strong political consciousness. Current interests lie in the ways in which human anatomy has been translated through artistic process and scientific method – specifically how the experience of living inside a body has been given meaning and the role of new technologies in the translation, expression and expansion of our individual and shared experiences of the human body. She has researched historical and contemporary anatomical collections world-wide and has participated in a number of art/science- based projects such as Reskin an ANAT Wearable technology Lab, Australian National University, With the Body in Mind (a multidisciplinary art/sciences forum presented through Arts in Health, Flinders Medical Centre and Not Absolute an exhibition of collaborative works by artists and medical researchers and scientists held at Flinders University Art Museum, 2009. In 2008 Truman was invited to participate in Thinking Through the Body (ARTLAB) –an interdisciplinary research project exploring the use and potential of touch, movement and proprioception in body-focused interactive art practices co-coordinated by Dr George Khut and Dr Lizzie Muller. The first public presentation of this research was held in Performance Space, Sydney, 2009. Thinking Through the Body continues to operate as a research ensemble. Since 2009 Truman has been artist in residence in the Autonomic Neurotransmission Laboratory, Anatomy and Histology, Flinders University, Adelaide. In 2010 Truman and neuroscientist, Professor Ian Gibbins were awarded a Teaching and Learning Innovation grant (Flinders University) to carry our their research project entitled: Translating the Body: the choreography of representation in anatomy teaching. Truman has just been awarded a ANAT Synapse residency to further her collaboration with Gibbins. Their research is focused on the exploration of the role of two and three dimensional forms of representation in the communication of functional human anatomy to students of medical science.
View all posts by Catherine Truman →
This entry was posted in Uncategorized and tagged bones, touch, words. Bookmark the permalink.