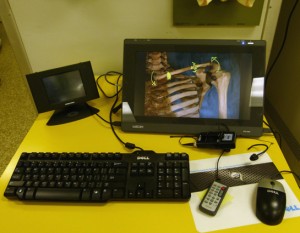 This was no ordinary Tuesday. Ian and I talked about it the following morning.

Here are some of my thoughts and observations…

Of course classes can vary from week to week but we had both noticed a distinct energy amongst the students during Tuesday’s practical anatomy class on the bones of the upper limb. They seemed so absorbed in their individual experiences with the material and especially in the referencing of their own bodies. And I know it’s relatively early days in this course, but usually there’s a sense of urgency and a palpable anxiety amongst the students. This is serious business. Everyone is aware of the huge amount of material that must be learned to get through the exams and that is all there is time for.

I’ve been wondering if the students are becoming a little more comfortable with the material they must learn for this course because Ian is always gently reminding them that their own bodies are totally relevant source material. Yes, I know he always does that but something’s different of late. Is it Ian’s teaching? Is it the students? Is it our awareness?

I’m more aware now of the various kinds of direct and indirect experiences in MMS prac lessons and that they are quite specific to learning human anatomy – the types, combinations and sequencing of experiences and the proximity and accessibility of forms of representation are unique to that teaching and learning environment. There is a constant interplay between internal and external referencing during a class.

I’m beginning to think that even before we get to the subject matter, that a cultivation of awareness is critical. It may seem obvious, but unless each person is directed to engage in these kinds of hands-on experiences – how are they to know what they don’t know?

How are they to know what is possible to know in this way?

The instructor’s physical presence and guidance are critical. But it is not as simple as saying…well it’s all here, get your hands on it! Although this kind of encouragement to handle the objects is important, the critical influence is also in the sequencing of experiences to be had in that special room. For example, there was a moment during Tuesday’s class when Ian suggested that the students have a close look at an Xray of a shoulder joint on a light box at one end of the room. ( I noticed the image was actually displayed at shoulder height).  The Xray had a few critical features identified with red code stickers and Ian told the students that this would most likely be in the exam. He then advised them to go to the skeletons on stands and identify the same features and also to feel the corresponding bony landmarks on their own bodies.  All the while Ian was casually tracing the bones of his own shoulder.

During the afternoon I began to take in other ‘vignettes’ of action around the classroom. I noticed a student standing directly in front of a skeleton, shoulder to shoulder, one hand on his own shoulder, the other feeling the boney joint of the skeleton and right next to him a group of three students standing close to one another in a circle, simultaneously cupping their own shoulders, fingertips on clavicles and moving their whole arms in large slow arcs in space. I was surprised that they weren’t testing each other by naming the structures as they usually do. They were simply looking at each other rather introspectively, deep in sensation, occasionally nodding. They weren’t rushing, they just seemed to be taking in their own experiences, in their own time. 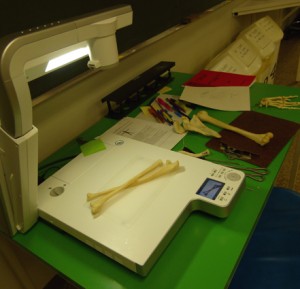 the long bones sit under the OHP

As per usual, all around on the tables were the loose dry bones of the upper limb, plastic shoulder joints on stands, radius and ulna still under the overhead projector projected on the screens all around the space and the wet prosections of wrist and shoulder joints sitting on the stainless steel trolleys.

Ian tells me that the tutors are reporting that this group of MSS students are grasping the material quite quickly and they say they are enjoying the prac classes in particular because of the hands on experience. Most say the experience clarifies the three-dimensional aspects of the subject matter. The tutors have also noticed that the students  have already formed quite close-knit study groups.

I will ponder the subtleties of the day further with Ian next week.

Oh yes…and we have received approval from the Social and Behavioural Research Ethics Committee to document students’ hands during the pracs. The trick will be to remain in the background as much as possible so as not to inhibit the class’s  usual unusual behaviour!

Biographical Statement 2011 Catherine Truman is co-founder and current partner of Gray Street Workshop in Adelaide, South Australia. Established in 1985, it is one of Australia's longest running artists' co-operatives. She has traveled and exhibited widely nationally and internationally and is represented in a number of major national and international collections including the Pinakothek Moderne Munich, Museum of Auckland, National Gallery of Australia, National Gallery of Victoria, Queensland Art Gallery, Art Gallery of Western Australia, Powerhouse Museum Sydney, Art Gallery of South Australia and Artbank In 2007 she was awarded an Australia Council Fellowship and selected as a Master of Australian Craft 2008-2010. Truman qualified as a practitioner of the Feldenkrais Method in 1999 and uses the body as a starting point in her work. Her work has always been informed by a strong political consciousness. Current interests lie in the ways in which human anatomy has been translated through artistic process and scientific method – specifically how the experience of living inside a body has been given meaning and the role of new technologies in the translation, expression and expansion of our individual and shared experiences of the human body. She has researched historical and contemporary anatomical collections world-wide and has participated in a number of art/science- based projects such as Reskin an ANAT Wearable technology Lab, Australian National University, With the Body in Mind (a multidisciplinary art/sciences forum presented through Arts in Health, Flinders Medical Centre and Not Absolute an exhibition of collaborative works by artists and medical researchers and scientists held at Flinders University Art Museum, 2009. In 2008 Truman was invited to participate in Thinking Through the Body (ARTLAB) –an interdisciplinary research project exploring the use and potential of touch, movement and proprioception in body-focused interactive art practices co-coordinated by Dr George Khut and Dr Lizzie Muller. The first public presentation of this research was held in Performance Space, Sydney, 2009. Thinking Through the Body continues to operate as a research ensemble. Since 2009 Truman has been artist in residence in the Autonomic Neurotransmission Laboratory, Anatomy and Histology, Flinders University, Adelaide. In 2010 Truman and neuroscientist, Professor Ian Gibbins were awarded a Teaching and Learning Innovation grant (Flinders University) to carry our their research project entitled: Translating the Body: the choreography of representation in anatomy teaching. Truman has just been awarded a ANAT Synapse residency to further her collaboration with Gibbins. Their research is focused on the exploration of the role of two and three dimensional forms of representation in the communication of functional human anatomy to students of medical science.
View all posts by Catherine Truman →
This entry was posted in Uncategorized. Bookmark the permalink.